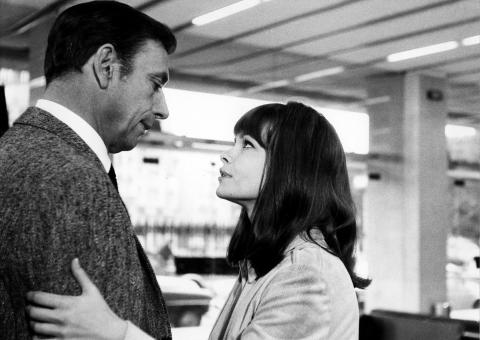 The following notes on Alain Resnais La guerre est finie were written by Pate Duncan, PhD Candidate in the Department of Communication Arts at UW-Madison. A new 4K restoration of La guerre est finie will screen at the Cinematheque on Friday, November 11, at 7 p.m. as part of our New French Restorations series. Admission is Free!

Alain Resnais’ 1966 cut-up political thriller La guerre est finie, heretofore lacking the wide availability and hallowed reputation of his earlier works in the New Wave-era, is as playfully complex in form and radically political as any of his more infamous films. Straddling the border between France and Francoist Spain, the film finds its unstable center in Communist militant Diego (answering also to the aliases Carlos or Domingo, but always played by the authoritative Yves Montand) who, after a run-in with Spanish authorities at the border, becomes caught in a tangled web of political intrigue, left-wing extremism, and slipping identities. Along for the ride is his wife Marianne (played by the formidable Ingrid Thulin, known for her devastating work in the films of Ingmar Bergman), strained by her husband’s precarious vocation, yet devoted to him all the same. Throughout the film, Diego meets Nadine (a coquettish Geneviève Bujold), the daughter of a sympathetic militant who lends out his passport to members of the group, and her own cohort of young, increasingly violent radicals whose ideals clash with his own.

Alain Resnais’ intensely varied filmography, aligned with Left Bank compatriots Agnès Varda and Chris Marker, is known for its meticulous attention to form and confrontational political content. From the critique of colonial appropriations of African art in Statues Also Die (1953), his early short film with Chris Marker, to the landmark 1955 film Holocaust documentary Night and Fog (a film censored by the French government for its acknowledgement of French complicity in concentration camps), to Hiroshima Mon Amour (1959) and its poignant exploration of the bombing of its titular city and the global implications thereafter, Resnais’ political commitments are well-documented.

Less visible to audiences is his potential for levity and love for popular forms. Resnais, who almost always wore a signature red button-down shirt, had one of the largest private collections of comic books in France and, later in life, kept up a correspondence with Stan Lee (which nearly resulted in a collaborative film between the two about a monster made entirely of pollution). This persists in his filmmaking too; Le chant du styrene (1959) is a colorful documentary on the making of plastics, while Same Old Song (1997) is a jukebox musical in which actors incongruously burst into a few lines from popular French songs. Resnais’ political emphasis and formal exactitude do not negate his love for the popular, especially evident in the genre elements present in La guerre est finie.

From plot summary and a few individual scenes, La guerre est finie reads like many of the contemporaneous New Wave pictures that surround it. It has the nocturnal atmosphere of Louis Malle’s Elevator to the Gallows (1958), the group intrigue of Jacques Rivette’s Paris Belongs to Us (1961), the topical political concerns of Jean-Luc Godard’s Le petit soldat (1963), and the analysis of leftist militancy seen in La Chinoise (1967), sharing with each of these a genuine engagement with genre film elements. What sets La guerre est finie apart from its counterparts, and indeed, from Resnais’ prior films, is its precise, dizzying form. Sharp attention to editing is a hallmark of all of Resnais’ films up to this period, but the radical intrusion of scene-disrupting editing in Muriel, or the Time of Return (1963) gives La guerre est finie its radical starting point.

The film opens on Diego’s driving along a bridge, a voiceover orienting the sequence somewhat obliquely, and then sees a montage of new, spatially distinct events before returning to the scene at hand. These radical intrusions persist throughout the film and, as David Bordwell points out, are cued neither as flashbacks nor as cross-cutting to simultaneous events, though later confirmed to be a series of anticipatory potential flashes forward in time. Disorientingly, these moments align the viewer with Diego’s imagining of how future events might unfold, creating a sense of canny game-playing and genuine suspense.

This lapidary construction is nothing new for Resnais, whose Last Year at Marienbad (1961) remains one of the great puzzle films of European art cinema. First-time viewers should not, however, mistake this formal complexity for a pretentious hostility towards spectators. You will get the hang of the editing structure, whose patterning never fully obscures the narrative at hand. Unlike Marienbad, this film grounds its flourishes in perhaps Resnais’s closest adherence to genre conventions up to this point, the espionage thrillers of Hitchcock feeling particularly instructive in Diego’s game of cat-and-mouse with authorities and growing unease with his own militant comrades. Following the New Wave tradition of Hollywood genre pastiche, Resnais’ masterful attention to form does not leave the viewer behind on its journey.

The film also includes a few audacious love scenes, developing off of Hiroshima Mon Amour’s similar attention to the human figure. One of these scenes diverts into complete abstraction, Diego and his lover enveloped in a blinding white light completely unmotivated by any realism in the scene. The other recalls Malle’s 1958 film The Lovers, whose frank sexuality made it the subject of the 1964 court case Jacobellis v. Ohio that gave us the famous adage, “I know it when I see it.” Though La guerre est finie never crosses borders into the obscene, its approach to sexuality is tasteful and contemplative in typical Resnais fashion.

La guerre est finie has, since its release, remained unfortunately relegated to minor status in Resnais’ filmography, depriving viewers of a rewarding experience and essential development in the auteur’s oeuvre. Fresh off of its appearance in the Cannes Classics section of the 2021 Cannes Film Festival, the film is perfectly situated for a reappraisal among larger audiences, especially those looking for something both challenging and rewarding. Even for those new to Renais or art cinema, the film is still a treat, one of the filmmaker’s most accomplished works in a popular genre.