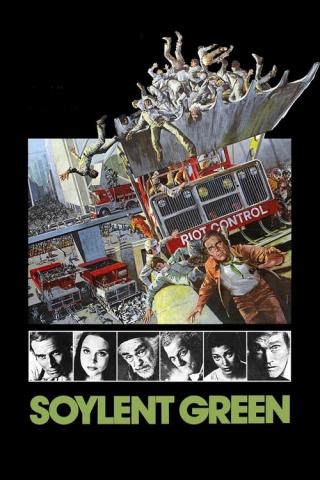 These notes on Soylent Green were written by film fan, film scholar, and film preservationist James Kenney, whose other reviews and essays can be found at https://tremblesighwonder.com/. James Kenney kicked off our summer 2022 season of Peter Bogdanovich movies on June 29 by presenting Squirrels to the Nuts, a movie he helped save from obscurity.  Soylent Green screens in our series entitled Damn You All to Hell: Charlton Heston and the End of the World on Saturday, December 3, 7 p.m., in our regular Cinematheque venue, 4070 Vilas Hall, 821 University Avenue. Admission is Free!

The now-recognized-as-classic futuristic suspense thriller Soylent Green gets top marks for dystopian escapism. The world in 2022 (!) is rapidly approaching a totally poisonous atmosphere, and a detective sets out to track down the assassins of a wealthy and powerful member of the board of directors of Soylent, the company that supplies most of the nation’s now-synthetic food. The detective uncovers a secret so devastating that no man who knows it can live, except for the millions who love the film and its panic-stricken forewarning of a 2022 that isn’t exactly what they portended, but isn’t that far off, either...

Charlton Heston, Leigh Taylor-Young, Chuck Connors, Joseph Cotten, Paula Kelly, Brock Peters and Edward G. Robinson star in the 1973 MGM production directed by Richard Fleischer (20,000 Leagues Under the Sea, The Boston Strangler) and adapted by Stanley R. Greenberg (he also wrote Heston’s Skyjacked) from Harry Harrison’s 1966 novel Make Room, Make Room!. Soylent Green may not prove superior to Heston’s Planet of the Apes, but, in this writer's opinion, it beats Heston’s The Omega Man, Beneath the Planet of the Apes and other such competitors as Silent Running, Damnation Alley, and Logan’s Run as standard bearer for the period’s trendy, dystopian, and nihilistic sci-fi product.

Why do so many filmgoers relish this cinematic representation of the termination of mankind as we know it? Well, the outré metaphor Green provides, rebuking our contemporary decadent lifestyles, is seductive, and the richness and skill of the set design submerge us –provisionally—in pure misery without wholly crippling us in existential despair. Heston plays well against type here – his relentless manliness and grim-faced resilience are twisted in a knot by his having to play an “innocent” in Soylent Green – an archetypal “tough guy” who has no clue what came before and what comes ahead, whose protective love for his “book” (the researcher who helps him close cases played by the aged Edward G. Robinson), catapults Green into a hemisphere that the competing 1970s sci-fi yarns don’t approach. If Heston falls behind on his cases, he’ll lose his job and join the seething, starving masses sleeping in stairwells, church pews, and on the streets, yet he refuses to replace the ever more inefficient “book” Robinson. There are no elements of adolescent fantasy in Green’s depiction of their relationship, and the old hand filmmakers and actors recognized this and thankfully proved up to the challenge of fashioning this cinematic relationship in the face of Robinson’s own imminent demise (the studio couldn’t get insurance for him, and he passed away before the film was released).

Every Tuesday is Soylent Green day, and the teeming multitudes line up to receive a ration of the green wafer, which, other than the black-market food reserved for the very rich, is the only staple food available.  At the time of the film’s release, MGM focused publicity on the rising meat prices resulting in scientists looking more and more toward synthetic meats and other foodstuffs, with “at least 25 firms in the United States…producing artificial meat, mostly from soya-bean flour. Japan is reported to turn out 24,000 tons a year…In Britain, a major textile group has begun marketing a synthetic meat made from bean protein…in the film, the Soylent Corporation, manufacturers of the principal food supply for half the world, is purportedly making the film from high energy plankton gathered from the oceans of the world.” Producer Walter Seltzer labeled Soylent Green as “science-fact.”

In support of this, MGM’s press materials took the unusual step of bringing in “Technical Consultant,” Frank R. Bowerman, Director of Environmental Engineering at the University of Southern California and President of the American Academy of Environmental Engineers to sound the alarms: “I am of the firm conviction that uncontrolled population expansion and its concomitant pollution of the air and the seas is the gravest problem facing mankind…inevitably it must foster a vast proliferation of riot, crime, murder, poverty and starvation….Unless steps are taken today, I see our cities teeming with masses of jobless, homeless citizens, existing on government subsidies…our sources of food are waning,…our seas are dying,...our air is being poisoned…our mineral resources are being exploited far beyond the national replacement process….While I share the dread most people have of a nuclear holocaust, I deplore the fact that the same people ignore the rapidly growing dangers of overpopulation. There is still time to reverse the trend. With action. The alternative is that ‘Soylent Green’ will be more than a warning. It could become the epitaph for mankind’s gravestone.”

The leads shared his existential despair, with Heston opining at the time in the film’s press materials “No one in the story is terribly upset about the human condition at the time. Edward G. Robinson plays a character that laments the lost civilization but everybody else has a sad sense of acceptance…lethargy…nothing takes on any importance except food and miserable shelter. It’s a lethargy we don’t need now to avoid it then, if you know what I mean…we live in an era when group responsibility is the thing. Group responsibility and group guilt. In such a situation, then, the individual doesn’t have to take any action to bring about a better world or take action to preserve the good things in the one we’ve got.” Robinson added “[it] takes place in New York City in the year 2022 when man has been inhumane to nature and the population explosion has 41,000,000 people living on Manhattan. I play an old codger named Sol Roth, who happens to be a hangover from a better day. He saw this terrible plight coming on and he feels a sense of guilt that he hadn’t tried hard enough or shouted loudly enough to help prevent it.”

As Fleischer recounts in his memoirs, “Heston was already committed to play the lead, and we all wanted Robinson to portray his mentor/sidekick. But there were difficulties. One of them was his health. It was fragile. He was eighty, and he had cancer. [Robinson] wanted more than Metro was willing to pay. They offered him a lower fee, with a deferment for the remainder. Eddie’s answer to that was, ‘At my age, I’m not sure I’d be around to collect it.’…Acting was his life. He was happiest on a sound stage. Soylent Green was his salvation. He loved the script. It was not only a wonderful role in an important film, but, as he kept telling his wife, Jane, it was about something. He knew he was dying and he knew this would be his last picture, and he was happy.”

Heston told Fleischer, regarding Robinson’s stirring euthanasia scene, “As we played it out, I rose to his performance. When we finished, I thought ‘OK…if they want it better than that, they have to get another fella.”  And as Heston added in his book The Actor’s Life “the film is very good, not least because of Eddie Robinson’s superb performance. He knew while we were shooting, though we did not, that he was terminally ill. He never missed an hour of work, nor was late to call…I’m still haunted, though, by the knowledge that the very last scene he played in the picture, which he knew was the last day’s acting he would ever do, was his death scene. I know now why I was so overwhelmingly moved playing it with him.”

<<LA GUERRE EST FINIE: A Political Movie in Popular Form
Please Give to the Cinematheque>>